The holiday season is upon us. #peaceandlove #happinessforall
Had an amazing time with my hubby and 2 or my kids at Hershey Chocolate World and the Jurassic World Live show. #hersheypark #jurassicworld #jurassicworldlivetour2019
It’s a PB&J kinda day #uncrustables
The hubby and I out on the town.
#messybun #messyhairdontcare #babysmiles
#apples are life #foodball #snacktime😋

Multi-tasking Moms vs. Dads, why Mom wins (and loses)

By Janine Thompson on March 18, 2019 • ( Leave a comment )
One of the biggest complaints that I hear from the women in my life is that their husbands can only do one thing at a time.
Usually, this doesn’t become an issue until there are kids in the household. It seems as though, if Dad is watching the kids, then that is all he is doing. There is no cleaning up, throwing a load of laundry in the washer, or making calls. The honey-do-list becomes seemingly invisible when Dad has the kids. 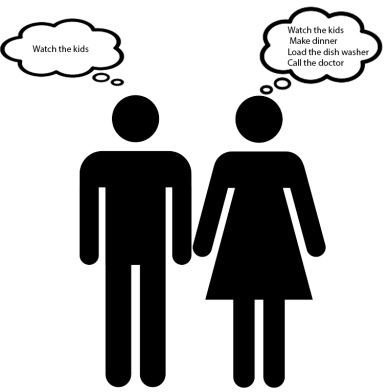 Why is it that Dad cannot care for the children and do his chores? Are women just inherently better at multi-tasking?
Most women would say yes, many men would tend to agree.
There isn’t much research into this particular claim. One study published in 2013 by Gijsbert Stoet, Daryl B O’Connor, Mark Conner, and Keith R Laws, did find that women out performed men in multi-tasking tests, but there just isn’t enough evidence to say that women are categorically better than men at juggling more than one thing at a time.
In 2017, Nevin Martell wrote an article for the Washington Post that aptly titled, “Believe it or not, dads can multitask, too.”
In it, Martell points out that his multi-tasking adaptation was not necessary until he became a father. He also discusses the myth of the 50/50 partnership with his wife, especially in the early stages when she was breastfeeding.
Martell also alludes to, what I believe to be anyway, the root of the issue…the fact that dual income households have only become the norm in recent history.
Think about it. For a majority of us, our mothers were the first generation of women to hold fulltime jobs. Our grandmothers were stay at home mothers, as were our great-grandmothers and so forth.
Women have developed the skills needed to take care of children and chores, and whatever else needs to be done, over thousands of years. For men, this just the beginning of the journey.
Dads, in general, are doing the best they can to catch up with us. So, when you are ready to kill your husband because he is too overwhelmed with 3 tasks to help you with any of your 50, just take a moment to remind yourself that this is new territory for not just him, but his entire gender.
Cut him some slack, and don’t kill him, maybe just wound him a little.

Tagged as: Men and Women, Parenting